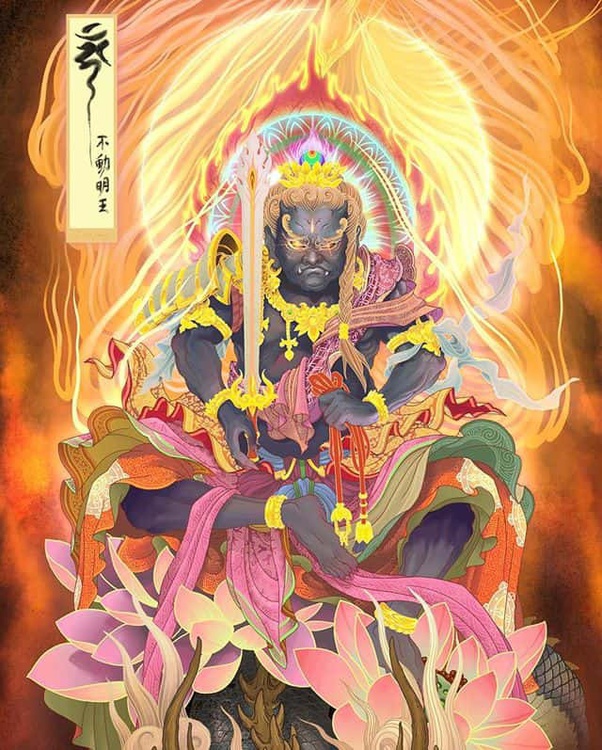 In Vajrayana Buddhism, preeminent among the Five Wisdom Kings, or Five Compassionate Buddhas of the Womb Realm is Acala, also known as Fudo Myo O in Japan or Candarosana in Mahāvairocana Tantra. The Five Kings make up the Dharmakaya, embodying the Buddhist principle of enlightenment.

Seated on His Lotus Throne, Acala holds the Sword of Discernment in his right hand. With this tool, He slices precisely through the center of duality, maintaining an ever-equal footing on the Path, neither veering left nor right, steadily piercing the reality with His keen discretion. In His left hand He holds a lasso with which to tie up those pesky demons of this and that should they venture too close.

Gyana (wisdom or knowledge), considered the most difficult of the four main paths of Yoga, requires incredible strength of will and intellect. In Gyana Yoga, the mind is used to inquire into its own nature and transcend the identification with its own thoughts, or ego. The fundamental goal of Gyana Yoga is to become liberated from the suffering caused by Maya (illusive thoughts and perceptions) and to achieve union of the inner Self with the Oneness of all life. This is achieved by steadily practicing the mental techniques of self-questioning, reflection and conscious illumination that are defined in the Four Pillars of Knowledge.

The first pillar is called Viveka. This means keen discrimination or discernment. It is the first pillar upon which the total comprehension of reality rests. When meditation is supported by skilled discernment it becomes tranquil and harmonious. Thoughts are no longer outside influences which come in to disturb. They are products of your own objective thinking processes. Differentiation between the real and unreal is not left to guesswork anymore. They are easily and candidly acknowledged. Imagination is quickly distinguished from inspired potential – all of this through applied, deductive reasoning. In Viveka, the act of thinking itself becomes a valued tool and trusted partner, empowering you with scientific process and artistic freedom.

Viveka as a practice may be translated as the Right Understanding of the Noble Eight-fold Path. The practice of Viveka is one of deep and deliberate analysis, applied intellectual effort towards the realization of knowable truth. It is philosophy sublimated to purpose. Viveka is the conscious observer and witness of the ever-changing reality on the never-ending road of existence. And it is the process of the observer observing its own self and coming to the realization that Self is never ever changing at all. This is discernment.

The mind fluctuates, the emotions flow. Over and over again the experience of being alive appears to be an outside force dictating that which we would feel or think. Viveka is the knowledge of choice, the realization of freedom, the observation of yourself as the observer and the willingness to take control – to take the reins of your own ‘Arjuna’s Chariot’ and guide your own horses to the destination. To witness and identify with your own self is what is meant by self-realization and the purpose of Gyana Yoga. This is what it means to have discernment.