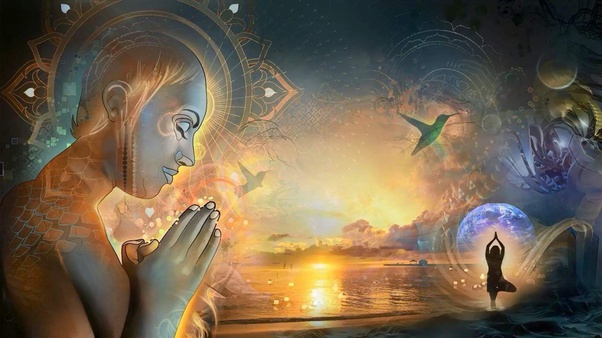 Shedding light upon darkness is not necessarily an adversarial dynamic. When I enlighten my child, lift the veil on her confusion with a well-placed answer or caress her fears away, I haven’t taken up a sword against the dark powers of fear and doubt themselves, but simply held aloft my own light that it may shine. Any neighboring shadows may do what they will in that light. If they are strong enough to remain, well perhaps then my light is not yet bright enough.

When I operated on my wife’s cancer, I did not pit myself against the invasive onslaught of whatever that was, nor did I take up arms against the fear or lifestyle that may have invited the invaders in, but rather through a whole-hearted envisioning of the force of love did I allow a faith based in knowledge to encapsulate my dearest and nurse her back to natural being.

The same when I called upon the Nature to bless us with life. Darkness had absolutely nothing to do with it – quite the opposite! It was again a whole-hearted faith, about the size of a grain of mustard, that shone a light so grand than angels might use the beams as slides from Heaven to grace us here on earth.

Being a lightworker in and of itself has nothing to do with being stressed out. When my daughter was born and I took my first job in the private sector, after having lived as a simple yogi for so long, I was stressed out and I didn’t even realize it. But when I did, I also understood the cause of that stress to be rooted in a simple lack of mindfulness of anxieties that had been building up. Worries over whether there would be enough and whether I could sustain a new lifestyle to provide enough topped the list. And here now it becomes a matter of mindfulness and properly applied effort and never did Buddha’s Middle Way have so much relevance to my path for indeed I find myself having to walk a fine line down the middle.

Finally there’s the dynamic created by my own personal agenda in life. Now I’ve become a bit of an entrepreneur, creating online courses in yoga and self-mastery, and providing personal coaching services in a number of disciplines and I’ve understood recently that in this day and age of high technology, there is an art and science to marketing one’s skills. I am finding that some of the ways I present myself tend to push people away, while others tend to being them closer. What an education for me!! Often the feedback I receive flies right in the face of my expectations, too. Take this simple advertisement I created for one class. I’m learning that for all the effort I put into its production, most viewers are not attracted to this style. What to do? Give them more of the same? Not if I want to succeed in my business and give my daughter the best schooling, etc. No. I also understand that more people seem to appreciate when I speak simply and intelligently about deeply influential concerns, such as in this primer on intuition which took me about ten minutes to produce. The path which required the least effort and served up the most value is also attracting the result I seek. Seems rather a no-brainer which path I should venture further along if I would attain what I seek.

And so it is with anyone, but particularly the awakened lightworker. Know thyself is the age-old axiom. Healer heal thyself is another. You are awake now. What do you want to do next? Why? Is it possible? What do you need to do to affect the desired outcome? Hey, the scientific method is often the spiritualist’s best friend, too.