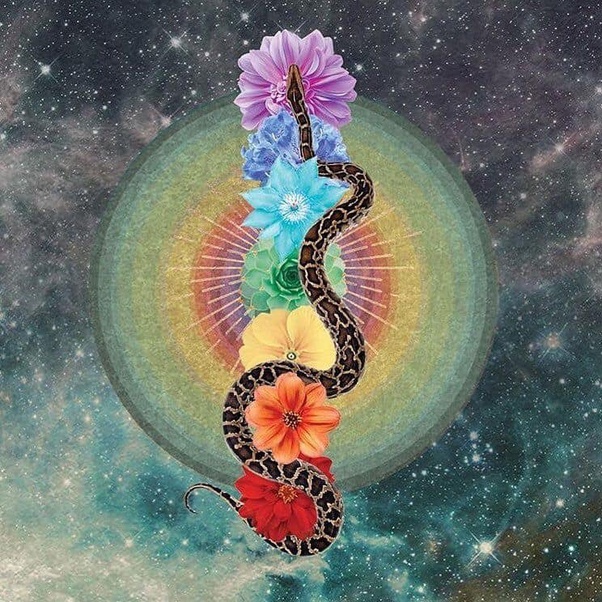 She comes to you when you are ready for Her. She comes to you because you love Her. Yes, there’s still a point at which you can freak out, and that might be temporarily problematic, but all these tales I read of imbalance, are not traditionally, historically, equated with what was originally termed ‘Kundalini or Samadhi’.

There is a systemic misunderstanding in the world of ‘spiritual practice’ today. Namely, that of the physical side-effects as a result of a ‘Kundalini rising’, ‘awakening’ or ‘event’.

But, if one is experiencing heart palpitations, migraines, burning rashes, paralysis, loss of sleep, loss of appetite, maladies related to adrenal fatigue, endocrine imbalance, and/or parasympathetic nervous system disorders of any kind – these are not samadhi. These are signs of serious imbalance. I understand that when one recovers from something like this, the utter joy that results from recovery might lead one to become something like born again, but when did malady start becoming synonymous with awakening?

Kundalini is an Indian concept. Yin and Ki are Chinese. English has its esoteric orientations, but Jung warned us about confused adoption of exotic concepts into our psyches didn’t he?

But have a read into what the masters throughout time have said about Her rising up through our consciousness.

Adi Shankaracharya (7-8 A.D.), in his treatise ‘Saundarya Lahari’, which might be translated as The Beautiful Individuation’ writes: “The invincible Kundalini Shakti pierces the six chakras and enters its abode slowly step by step.”

In the Yajurveda, Kundalini is mentioned as a virgin energy which moves like a devoted wife and destroys all evils.

In Hatha Yogpradipika she is described as an aspect of the eternal supreme consciousness and Guru Vashistha asserted that Kundalini is the seat of absolute knowledge.

Liberation! That means total and unequivocal release from all mental suffering. Destroys all evils! Supreme Consciousness! This is not me to say this. This is what the sages say.

Kundalini is mentioned in Gyanarva Tantra, Lalita Sahastranam, Laghustuti Vamkeshwar Tantra, Kshata Chakta, Nirupana, Ghetanya Samhita, and many more, and in no recognized text is it ever mentioned, not even once, that the Kundalini awakening may bring about anything like a terrible physical side effect the likes of which I read people being afflicted with in these forums and claiming that their symptoms are a result of awakening. It is just the opposite.

Kundalini Yogis caution proper preparation and purification and practice for a reason.

For instance, take Hatha Yoga, the yoga of poses and stretches and core muscle training, balance, breathing and the like. A newcomer to the path, say a man or woman in their mid-thirties, looking at fitness or spirituality for the first time, but really never having ventured too far from the sofa before, would have to approach the practice of hatha slowly. His/her tendons would be tight, muscles not quite toned and strong yet; she would start with basic stretches and warming up routines before advancing to more intermediate flows. What would happen if her guru were to try to tie her in knots from the start? She would break!

There is a path of activity, meditation, practices which stimulate the body’s life force in such a way as to allow for consciousness to reside in that place known as sahasrara permanently. A Shaktipaht might give someone a temporary feeling of an energy rising, in the same manner that energy healing is a real thing, Tai Chi is a real thing, Qi Gong is a real thing – some people can manipulate energy certainly! But that manipulation by a guru, or a master of the arts of energy manipulation, will either manifest a physical reaction, like a healing, or a bubbling up of bliss, a temporary clarity of deep insight – SOMETHING TOTALLY POSITIVE! Kundalini Awakening is Enlightenment people! The Masters, whether Jesus, Buddha, Vashishta, Yogananda, Alan Watts – whoever you want to call Master – we exist to enlighten, to show the way, to guide into happiness and RELEASE FROM SUFFERING! Not create more suffering. If you are suffering, if your suffering has become heightened due to some practice or someone’s touch, if you are in pain, SOMETHING IS WRONG! Not right.

And that’s not to diminish the experience of the hurricane rush or whatever poetry you want to ascribe to the very temporary experience of a body coming to grips with this paradigm shift. But even Pratyahara, the retention or cessation of breath, is actually a pleasant thing.

This is what the modern day sage, the supreme mother Mataji has to say about Kudnalini.

“The Kundalini is your own mother – your individual Mother. And She has tape-recorded all your past and your aspirations — everything! And She rises because She wants to give you your second birth. But She is your individual Mother. You don’t share Her with anybody else. Yours is a different, somebody else’s is different because the tape-recording is different. We say She is the reflection of the Adi Shakti who is called as Holy Ghost in the Bible. But She rises without any difficulty. Hardly any time it takes.”

This is what the sage Gyaneshwara said about Kundalini in the late 1200s.

The Buddhists liken Kundalini rising to the walking of Lord Buddha’s Middle Path to Enlightenment or Liberation. Lord Buddha was a Master Yogi who only decimated his body willfully through the most austere of penances. It was very intentional.

Kundalini is our very own Nature! It is our own energy, there to nourish and support us. Keep us whole. The power of Kundalini is that of absolute purity, innocence, auspiciousness, pure love, enlightened attention. It gives pure and total joy. It is the fullness of God residing within the man.

When Kundalini is elevated, the result is a state of happiness. Not giddiness. Not a bliss that never knows anger or sadness or anything negative. An enlightened personality grieves consciously. An awakened spirit will anger at injustice and move against the same.

There should not be so much misunderstanding around the phenomenon of enlightenment and Yoga. But it is easy to see how it has resulted. When the go-to texts show a householder Gopi Krishna, suffering from something he calls a Kundalini awakening, people will equate their own symptoms with the same. The experiences that the 20th century mystic writes about have been echoed by many, but a large readership does not make a man a master.

Shamdasani writes of the westerner’s predilection for spiritual emergency and equates psychosomatic symptomology with Carl Jung’s depictions of Kundalini rising and his warnings about the potential for psychosis in the confused mind.

My hope is that the takeaway from this essay is simply 1) If it hurts, it’s not good. If it hurts, it’s not yoga. If it hurts, somebody is doing something bad to you. 2) Any yoga requires preparation and practice. Any yoga is best practiced under a master until you yourself become the master. 3) Kundalini is Nature. She is benevolent. She is supportive and empowering. She is strengthening and nourishing. Awakening feels good. That is not to say that there is not a roller coaster of thought and feeling on the developmental path – there is. But the pathway of energy, the Nadis, Ida, Pingala and Sushumna – the paths – they should be clear of debris before one attempts to drive through them.

Kundalini is your birthright and at the same time, not everyone is ready either. Nurture your own nature and your nature will nurture you in all ways.

With much love and blessings upon blessings to you and all those around you.