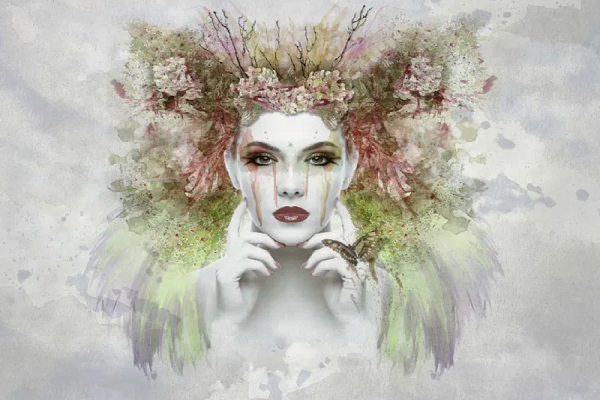 Google ‘Jungian Tarot’ and you will receive literally half-a-million hits; such is the connection and broad correspondence between Tarot philosophy and the deep mind research of the late Austrian psychologist, C.G. Jung.

In his Collected Works Vol. 9 ‘Archetypes & the Collective Unconscious’, Jung says the following about the cards: “If one wants to form a picture of the symbolic process, the series of pictures found in alchemy are good examples, though the symbols they contain are for the most part traditional despite their often obscure origin and significance. An excellent Eastern example is the Tantric chakra system, or the mystical nerve system of the Chinese Yoga. It also seems as if the set of pictures in the Tarot cards were distantly descended from the archetypes of transformation, a view that has been confirmed for me in a very enlightening lecture by Professor Bernoulli.”

And while Jung has also noted that: “They are psychological images, symbols with which one plays, as the unconscious seems to play with its contents…corresponding to a playful development of mankind.” He never explicitly endorsed a particular deck or set of images, so keep this in mind when you find your ‘Jungian deck’ online.

Carl acknowledged that the cards might predict the future, but only in terms of how the present has evolved from the past. He called the reading of the cards “an intuitive method that has the purpose of understanding the flow of life, possibly predicting future events, as all events lend themselves to reading the conditions of the present moment.”

Jungian Archetypes (see this Wiki for a primer), or primordial images, are inherited potentials that are actualized when they enter consciousness. This last phrase was his consistent modus operandi; everything he did, everything he researched, every tool he developed in his distinguished career spanning approximately 60 years, was to culminate in one overarching theme – to make what is unconscious conscious. To bring the darkness into the light.

Archetypes are more than the mythological motifs and conscious representations (see Joseph Campbell’s Power of Myth), products and constructs of cultural values and personal predilection such as the Hero or the Wise One. Rather they are deeply instinctual, ‘archaic remnants’, and as such share a common bond across all of humanity. Examples of the most common archetypes are the masculine and feminine principles of anima and animus, the ego, the self, the persona, the shadow, the child and the mother and father principles.

The Tarot are tools to make the unconscious conscious, to actualize the archetypes and bring them into the light. In his Collected Works Vol. 13 on ‘Alchemical Studies’, we can find a nowadays oft-repeated quote:

Taken out of context, these words have been used to support a vast array of personal opinion, most popular of which is the need to embrace one’s darker characteristics such as anger or fear, the acceptance and acknowledgement of which should lend to a personal cleansing, a great healing to promote a greater enlightenment. And this is the problem with taking words out of context and not giving the author’s education its due and is the cause of a great confusion today that is witnessing multitudes of people equating their personal imbalances with spiritual awakening, indeed labeling these imbalances as symptoms of awakening all the while beguiled as to why they are trapped in the throes of depression or worse for years on end. This is not to say that acknowledgement and acceptance of oneself are not cathartic and healing; indeed that which we resist the most only rears itself up with more force. But personal insight and integrity, psychological imbalance and psycho-analysis, shadow work and enlightenment traditions are each entirely different things.

As mentioned above, one of Jung’s most overarching concerns was his work with the collective unconscious and the notion that in order to achieve individuation, top-most priority on the Maslovian hierarchy of needs, one needed to make the unconscious, conscious. It was this unconscious portion of self which he referred to as the darkness, or the shadow, and it was the process of integration of that which is unconscious, or bringing that darkness into the light, which he made his life’s work and referred to as shadow work. Notice that this has nothing to do with bringing dark behaviors or psychological tendencies into the light. Quite the opposite. To this point I might refer you to an example in Collected Works Vol. 1 ‘Psychiatric Studies’ Ch. 3 on Manic Mood Disorder.

The popular quote above regarding enlightenment comes from a section in Alchemical Studies called “Philosophical Tree, ‘Individual Representations of the Tree Symbol’” with reference to Figure 26 presented in a set of 50 figures in the chapter. In the proper context, we’ll notice that he is analyzing images which a patient of his has drawn, and he is alluding to her tendency towards what we might today call ‘toxic positivity’, that is, associating Self with too much light, while refusing to acknowledge the darkness also therein. The patient in question was heavily influenced by Hindu and Theosophical teachings which colored her perspective and gave her a decidedly one-sided view of a more encompassing reality. The full quote reads:

The plants at the foot of the figure are really rooted in the air. Tree, tree nymph, and plants are all lifted up from the earth or, more probably, are on the point of coming down to it. This is also suggested by the fish as emissary of the deep. The situation is in my experience an unusual one and may be due to theosophical influences. Filling the conscious mind with ideal conceptions is a characteristic feature of Western theosophy, but not the confrontation with the shadow and the world of darkness. One does not become enlightened by imagining figures of light, but by making the darkness conscious. The latter procedure, however, is disagreeable and therefore not popular.

For Jung, it is not a matter of good versus bad, or darkness versus light, but rather known versus unknown and conscious versus unconscious. Shadow Work is much more than what people are making it out to be today. Here I would refer interested readers to Jung’s ‘Nietzsche’s Zarathustra Seminars’, but in the meantime, if you would like to look more deeply into this quote or examine the construct of archetypes in more detail then feel free to avail yourself of the Public Resources of this blog where you will find both Vol. 9 Archetypes & the Collective Unconscious & Vol. 13 Alchemical Studies.

Use those works to supplement your readings of the Tarot or your crafting of personalized spreads according to the Golden Rule of Whatever Works for You and by all means, be sincerely interested in making the unknown known and bringing the darkness into the light.