I didn’t notice them crossing the main drag as I sat rapt in my work at the keyboard. Jack Johnson was crooning pretty melodies through my headphones, and the sun was rising quickly over the Tibetan bazaar obscuring their approach. Not yet 10 a.m. the entrance door to my hotel room just off the New Manali Boulevard creaks open and suddenly Vinayagananda Baba walks in through the unlocked door, his man-servant Ranju close behind him. A lovely surprise as I hadn’t thought to be meeting my Guru again before boarding the afternoon bus to Delhi where I’m to be giving my attention to Ayurveda for the next few weeks.

Ranju takes a seat next to me at the coffee table peering expectantly into my laptop for a glimpse of the Baba of yesteryear. He knows that I’m busy transcribing the past decade of the master’s conversation, but his own relationship with Vinayagananda is still new; Ranju has never witnessed the beautiful electric-black baba with flowing mane shining in full Saivite regalia, and when he does is fairly awestruck. The three of us together watch some of the older footage for a few moments, the baba chuckling intermittently in total agreement with himself.

“At that time I didn’t speak everything I have spoken this time with this guy.” He says to Ranju. “Some things I kept hidden. But I cannot keep it hidden from him. He needs all that. When I am gone it will be him who carries on after me. He will be the one to tell the truth to the people.” He lifts his hand in the blessing gesture. “He will be the one to do all that. I have already transferred it all to him.”

The master removes a small packet from his inner vest pocket and passes it to me telling me to open it up and give it a sniff. It is vibhuti, the sacred ash that the sages smear on the brow, or over the entire body when they’re really serious about a mission or operation. Opening the small envelope, no bigger than my palm, I hold it to my nose and allow the aroma of bliss to greet my senses. It’s that same aroma that I’d asked him about previously, the same one that seems to be perpetually attached to him, so sweet, and innocent. How could such a fragrance attach itself to this stuff? It’s just ash.

“You will simply put a little dot on your forehead. Before laying down on your bed at night, put a little, and just be there. And in the morning, after you have washed your face and you are ready to go out, put it again. Just a little. People will see that and ask you what that is. The indication is death. When you’re asked you just tell them ‘this is what we are’. And not to waste it as there is only a little. I have put everything into that.”

Death. Whether as the Guru overseeing stern sadhana in the cremation grounds of Bhutanath Temple, the Sage and instructor in the terms of final salvation, or as the gentle father whispering tender admonitions to a child trembling child in the face of the inevitable suffering of this body, in one way or another the intertwining of death in the skein of life always played an important role in Vinayagananda’s teaching. Sometimes I felt a deep honor and pride, like a prince destined to ascend the throne of the wisdom kings, welcoming the heat of the fire that burned away my fears and molded me into steel. The past ten years of my initiation onto the path of the yogin rush through my mind at the speed of thought as I realize he has been preparing me for His own death since the beginning. I fold my hands to Him and apply a little dot to the center of my brow. The smell of freedom is good and I immediately sit a little taller.

Presently He returns our attention to the American government and the final days of the Bush presidency. With presence and surety of mind we rest on this point together. The Self rests here, and the entire Council is observing with great interest. The politics of fear should be defeated and we are looking forward to democratic wins in the house and senate, and perhaps even a beautiful, electric black man may take the presidency in 2008.  She calls. The Time calls, for my personal attention, and I am absolutely aligned with Her objective.

Vibhūti is just ash, like a crystal is just a rock and a magic wand just a piece of wood. It makes no matter how it’s used, to decorate or symbolize, ritualize or idolize. Smear it on the forehead or over the entire body, if you are not already that, then no amount of pageantry is going to get you there to where you already are but don’t recognize anyway. So what’s all the drama? What’s with the act? This He asked me, too, back at the turn of the millennium, when denying my essential Nature I instead played at this and that. So He sent me into exile to play just a little more until I realized something else. But that’s another story altogether. And yet, the intention I wove into the mala which I strung for the people there in the town’s square during that time is, I suppose, at the crux of this story, too. For it is most precisely an energized intention that makes the entire universe turn. 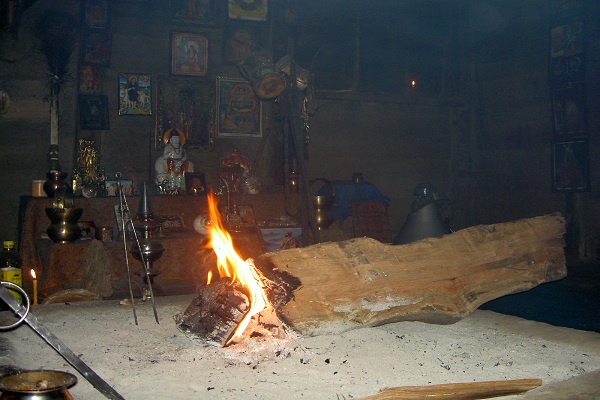 And it makes no difference from where that ash is derived. Take it from the tandoor, the dhuni, the dung or funeral pyre – ash is ash, none more sacred than the next. The Lord of All is equally in a rose as in a dead body. But who creates that ash – that is of primary concern. Who would you allow to craft a sword for you? You want a master craftsman, isn’t it? Who will you allow to build your home, to educate your child, to heal you or to teach you? Whose word will you allow into your ear, or to hold your thoughts and attention? What kind of energy will you allow into your sphere? And what kind of energy do you yourself wield and to what purpose? These are magical questions indeed. Because whatever that intention was that the Master of Life, Vinayagananda, sewed into that ash that day, whatever that feat of Divine technology, it has continued to grow to this day 16 years later. Literally. Though I used, and even shared it often, what had come to me as a tiny packet-full of energized intention, now fills several little pouches and is so diffuse and energetic that it passes through paper and plastic packaging as easily as light passes through darkness.

What is the effect of applying such a technology as that inspired ash onto my own skin and letting it seep into me while I sleep? I don’t think about it much; it comes from a trusted source.

What is death, is full of life, too? Tell me about that magic if you can. It’s just another resurrection story, isn’t it?