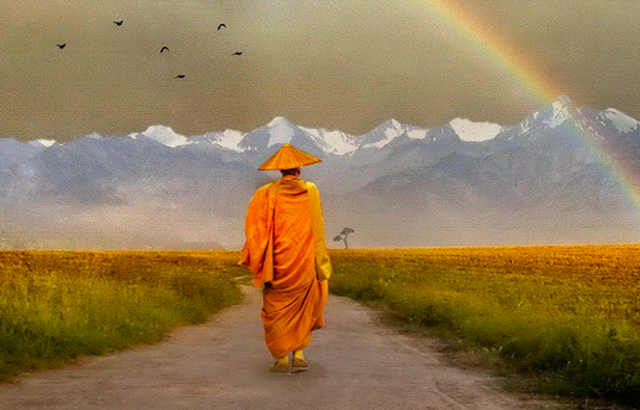 Once upon a time my Guru and I were having our tea in the Tibetan Quarter of New Manali, speaking of this and that under an early-winter Himalayan sky, when He bluntly told me that I should “learn how to be alone in this life”. More than a decade into our relationship to be sure, He wasn’t referring to the practice of staying by myself in my mountain abode, or to the pilgrimages that would take me here and there. Neither was He referring directly to my relationships with friends or family. Actually I didn’t quite know what, in fact, He was referring to, as was often the case when He planted a seed or dropped a bomb on my mind.

I write about this today because I have seen or heard four times now in as many days, references by people close to me, of loneliness on the Path of Self-Mastery, and they’ve bid a recollection. I considered that my friends’ expressions of their personal experiences were perhaps the tip of a very broad iceberg, of a larger collective who may perhaps be experiencing this very same feeling, and in this light wondered if a good parsing of the Guru’s language might be called for, because what He said was, that I should learn how to be alone. Not that I should feel lonely about it.

Guruji spoke eloquently and meticulously on some matters, but on others, like this one, He’d introduce a powerful one-liner like a koan and let it simmer with me for the rest of my life. And it has; I’ve considered this admonishment often. Sure, it could be taken as an admonishment in my case. I’m just as effected by the hindrances of self-realization as the next guy. You know, those demons of mind called anger and avarice, lust and greed, illusion and attachment – oh, there are lots of guys. But even viewed in parallel, with an equal encouragement to enjoy all the blessings of Grace which the Lord pours down upon my innocent brow, this advice to learn how to be alone has brought with it a certain enabling discernment, an empowerment of equanimity that is quite forbidding of loneliness. Yet if truth be told, there is suffering, too.

My Master often spoke about the strength required to suffer, a very great strength not easily developed by a mind beholden to none. The power to suffer for humanity was once upon a time seen in a great man, wasn’t it? Not too many people could do it quite like Him. Perhaps I shouldn’t have even brought Him up, but if we’re not trying to model the Masters, then what are we doing anyway? Guruji was a master empath; he could take on the pain and suffering of a person, manifest it physically in His own body to show a truth, let it go, and equally manipulate, modulate, temper and heal the human condition externally. He could hold the ocean of poison in His own throat until the angels churned the nectar. He was austere, but not stoic. He was steel, but flowed like water. He showed me that sacrifice is the epitome of benevolence, and suffering the result of sublime joy. It’s true. One cannot suffer like a sage until that joy is met.

When the Master bull-dozed His hermitage and removed us from the idyllic village which I’d become reliant upon, moving us into an apartment in a neighboring township, He told me that it was because God was found in the middle of all the people, not upon an isolated hillock. That the One was in the many and neither Hindu nor Buddhist nor Christian had a monopoly; the God was not to be rolled up in one idea, but would immediately confound with another. He took the mind of a philosopher and tamed it with reason, letting me discover for myself what it meant to live alone among many. For I was most certainly alone. A lone white man with a lone perspective in a world of people looking at me like I’m nuts. A man for whom the snow answered with a promise and a voice, delivering sustenance for the apple orchards only because I’d entertained a compassionate thought that it might be. That even though they’d killed my favorite dog out of their ignorance and fear, blasted the poor guy with a shotgun, on another level entirely the rains still had to be; the valley needed the nourishment. Perhaps it was my feeling for the children; I don’t even remember anymore.

If you want to attain, then you have to kill the body feelings.

Readers who have enjoyed my masterclass might be familiar with this quote and its prominence at the beginning of the class. It’s a powerful statement and a teaching that perhaps needs a lifetime to fully appreciate, because left unappreciated, the lone path of self-mastery will indeed be lonely. We will forever be called to stone facades in order to visit the temple, instead of being enabled to worship at the altars of our own hearts, and it will make no difference whether we are surrounded by crowds, drowned out in the anonymity of the city, or living ascetic lives in heavenly vales, as long as the mind is not beholden, for all its temerity and boisterousness, all of its feigning to knowledge, it will always be the lonely child of lost innocence.

I am alone on my path; it absolutely must be so. But my mind is beholden to me, so there is that small solace, and loneliness should it encroach, is met where it lives with swift and decisive indifference. What else can I do? I am a man. I am yogi. And this is Real Yoga.