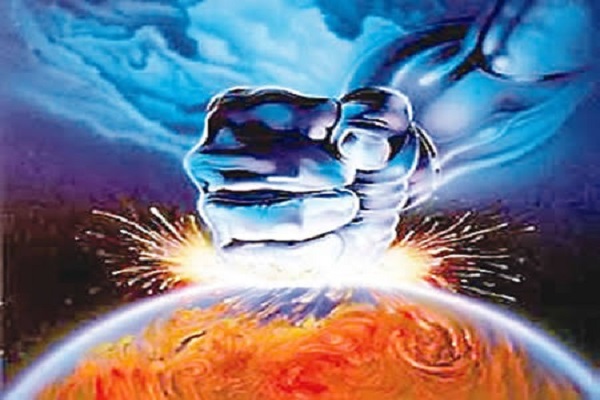 Is it a foregone conclusion that there is, in fact, a God who knows something? The philosopher in me moans at the determinism of this question. The straight-talking mystic, on the other hand, might be moved to invoke the empirical and speak on the quandary of prescience, but so perfect is the illusion of mind that tells itself it’s got figured itself out, that thus enabled to speak for God, he winds up giving it a shot.

God, people. We’re talking about GOD! Whatever that is, whatever that means, it MUST by virtue of the very concept, be so much vaster than this blog piece or any of the conjecture herein. Because it is ALL conjecture. But most of this conjecture will not even be logical simply for the fact that an argument will proceed, firstly, upon faulty premise, and secondly, without a standard definition of the subject.

“If God knows everything…” God is everything. People bandy about words like omniscience, omnipotence and omnipresence as if able to conceive the unimaginable, and go a step further into the muck when setting limits to those very terms which are supposedly limitless. The question does not suppose ‘a’ God, as in the figurehead of myth and legend. Rather the missing article nods to the Singularity of the phenomenon, the thing, called God. And whatever that is, it’s got to be bigger, or smaller, or something completely untranslatable, or translatable – something beyond the propositions and conclusions in the question, or perhaps the answer is contained within. Confounded yet? You should be. It would be an honest place to start.

But I doesn’t know what it’s talking about!

It makes all this stuff up. And pretty stuff it is that sustains itself. Asking questions like IF God this and that… The audacity. Now, if there is a devil, this devil is verily a cohort of this I. After all, you has somehow convinced itself that it’s got everything figured out.

Why Does God Get Angry? How utterly small – to create GOD into an emotional being like oneself. To personify. Most would acknowledge Mother Nature to be a personification. Few, if any, say ‘Mom’s angry’ when there’s a storm. The Pagan in me just sniffed. Most people acknowledge Santa to be a pretty white lie to tell to children for this reason or that, but acknowledge the spirit of Christmas to be the human feeling that it is – a result of the human psychology. So how is it then, in this day and age, when the myths have all been revealed, the psyche so analyzed, the treachery of Constantinople uncovered, the philosophies so finely developed – how is it that people are loathe to give up this personification of God? What is this attachment? Who is attaching? To what is it being attached? I Am telling you – we is tricking ourselves.

If God knows everything…

A yogi should know better than to feed any conjecture that comes after this premise. There is no if. There is no God as what is being parsed here. There is no future. There is freedom. There is now. There is will. There is the cornucopia of human design. There is the antithesis to all of this, too. We are doing that with our minds, creating all this nuisance for ourselves by making God into us instead of sublimating ourselves into God. Even psychology reveals individuation to be the goal that would reconcile these judgments of this and that. And if you is not individuated yet, how does you think it can judge God? The pinnacle of human ignorance (arrogance? Whatever the adjective, I’m already in trouble.) is on full display in the confusion that a question like this provokes. Perhaps that’s why Lord Buddha called questions like this Imponderable.

Why does God get angry?

Doctors and philosopher, mystics and teachers, lawyers and Stanford graduates and Judges – all the educated, the erudite, the intelligencia, the humble and the proud, the learned and the wicked, the brave, the religious, the spiritual, the layman and the lad – all will come forth with worthy hypothesis to address this fallacy as truth. Opinions will be formed, half sardonic, half ambivalent. The jaded will have left early, the self-righteous will take further comfort in their rightness. Perhaps the philosopher may throw me a bone. The ardha dagdha may feel to argue. I hope the teacher might come to teach, the doctor to mend, the lawyer to pick up the inconsistencies in my prose. But a comment down below? Ah, that, God only knows.