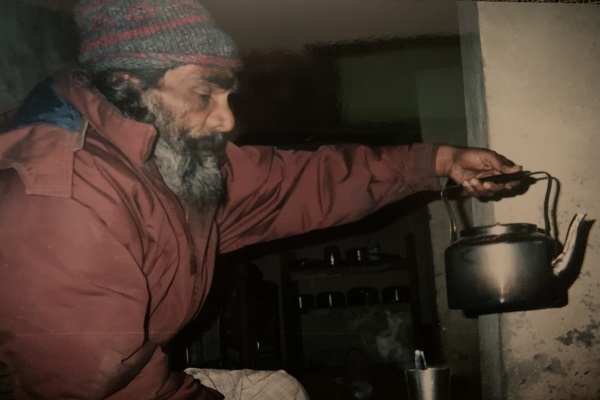 I met Baba (Swamy Vinayagananda) when I was 24. When I began life at his hermitage in that idyllic vale, the morning routine was invariably the same. He would wake first at around 4am to make a fire. I would wake at around 4:30 to the sound of Sanskrit devotional hymns – sounds calm, but often accompanied by drums and traditional classical instruments. The 4:30am starter hymns were of the Carnatic variety, Tamil Language. Here a sample at this link.

Meeting him at the fire, tea was prepared and we would sit with that, roll a few joints, watch the black of night turn to deep blue and then all the gradations of sunrise, listen to the first birds arrive to chirp their morning song on the single sill above the tandoor oven where the smokestack let out, and he would begin discourse on the nature of life and the human condition. For about an hour I would meditate on that discourse, sitting there next to him on the hardwood floor of the hermitage, tending the fire, alternately losing myself to the iridescence of his singularly focused eyes, and after a while I would go out to the jungle to toilet accompanied by a great brute of a terrier who had befriended me early and took to guarding me on my morning travels. Returning to wash, I next go to the well for several buckets of water to prepare a bath, then make a simple breakfast of toast and more tea, or instant coffee – all of this was done on a small wood-burning stove.

Discourse, music, tea, joints, love, happy thoughts – all free flowing. 7:30am breakfast, 8 am a little worship at the altar, physical or in the heart, and we are out of the hermitage for a 10km walk to a neighboring town to grab a newspaper and sit by the roadside to watch the day, the people, the events – and thereby know ourselves through the creation. Those hours on the roadside were filled with some of the most profound moments of my various sadhana. A bit of lunch and we are back to the hermitage by 1pm to welcome the schoolchildren back to the village from school, worshipping at the feet of their innocence with candies, laughter and more happy feelings.

One of Baba’s first teachings of that era, and a quote that burned indelibly into my heart and remains with me to this day:

God loves a man with a routine.

There’s a culture among the ascetic yogin, a very deep relationship with this herb. There is a unique awareness augmenting potential of the cannabinoid, a rather fascinating interaction, this natural affinity with the human neuroreceptor and unlike any relationship in the psychotropic family. That’s a discussion in and of itself though.

Per my experience, a baba always has a chillum handy – that’s a tubular, clay pipe in which a stone is placed and packed atop with a mix of tobacco and hashish. A baba will smoke alone, or pull it out and pass it around in company. When babas get together, passing the chillum is a ritual affair, much like the peace pipe of a Native American tent. Smoke, and get on with the business of awareness. It’s such a culture that there you can even find pictures of the AdiGuru, Shiva Shankar, bearded, dressed as a yogi and pulling on a chillum.

Babaji liked to roll a joint by emptying out a cigarette and removing the sticks from the leaf, heating up a piece of hash about the size of your fingertip until it turns to powder, mixing into the leaf and repacking the cigarette paper with filter already attached. We enjoyed this way of being for quite a few years, until we stopped. The aghori will visit every extreme to know the human condition, but won’t remain there but for a few moments. Everything goes, the darkness and the light, and nothing stays; we are empty. My master would take pains to wean me of my habit in the latter years of our relationship, always modeling the way for me first, emptying Himself that I might know the way of an empty man.